Children from primary schools’ Care clubs around the country have taken part in a series of activities touching on drug awareness and prevention.

The Campaign for Awareness, Resilience and Education against substance abuse (Care) normally dedicates one month every year to highlight its drug and alcohol awareness and prevention in schools. Since last year, however, in view of the pandemic restrictions, this activity has been on a much-reduced scale.

This year, schools, in partnership with Care, held an awareness and prevention day during last week to promote the importance of prevention in the fight against substance abuse in children.

The schools commemorated the awareness and prevention day in different ways. At the Anse Etoile primary school, the celebration was through interactive activities to engage children in positive and self-protective behaviour.

As Care’s local prevention theme against drug and alcohol abuse is ‘Ekout Lavwa Bann Zanfan’, for the years 2021 and 2022, the school also had educational activities around the theme.

‘Ekout Lavwa Bann Zanfan’ highlights the importance of listening to children as a crucial tool for prevention and first step in protecting them against drugs.

The school’s Care club had organised,for students from crèche to primary six level, a special assembly with activities including praise and worships with songs and poems recital, a mural painting with special messages to raise awareness of the dangers of drugs including building the children’s resilience against it.

Art works of past students who took part in the ‘Ekout Lavwa Bann Zanfan’ art competition were also on display alongside posters with messages against the use of drugs.

The school was honoured with the presence of Noella Gonthier, the director of Care, and other representatives.

In her address, head teacher Jaqueline Celestine gave an insight on the dangers of drugs, calling on the students to follow Care’s motto which is ‘Non Mersi mon Korek’ (No thank you I am OK) if they are offered or pressured to take drugs or alcohol.

She also called on them to make their sweet voice heard loud when they speak against the use of drugs in their families and in the community.

She urged them to report to confidential persons if they are being forced or encouraged to take drugs or alcohol.

The address was followed by a prayer intention by the pupils, words of wisdom on the dangers of drugs and on the beauty of children, followed by poems and songs by students and teachers.

The special assembly ended with the viewing of the exhibition and the live mural painting by the students and arts teachers.

The accompanying photographs show some highlights of the activity at the Anse Etoile primary school. 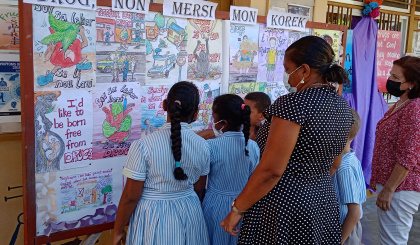 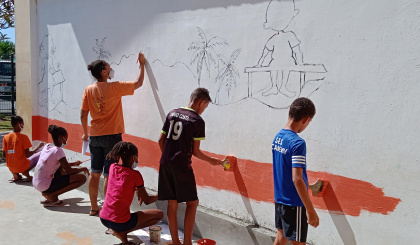