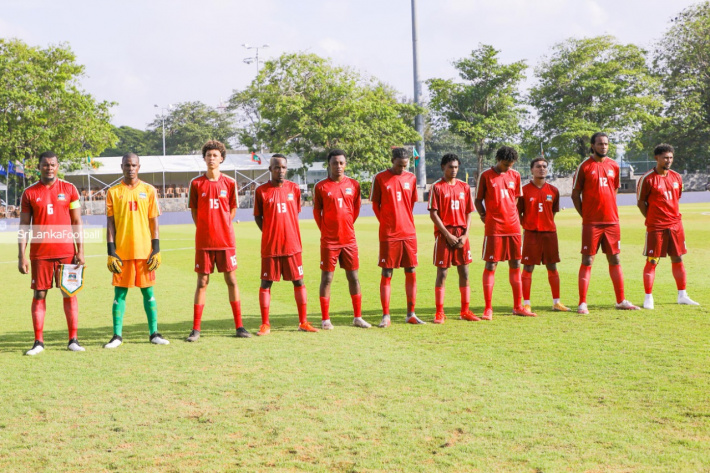 The Seychelles national team came from behind to salvage a 1-1 draw against Bangladesh on Wednesday afternoon at the ongoing Prime Minister Mahinda Rajapaksa international tournament being played at the Race Course International stadium in Colombo, Sri Lanka.

Seychelles had seen their scheduled match on Monday postponed for the following day only to be informed they would make their debut on Wednesday in this tournament affected by stormy weather.

This change in programme seemed to have played on their morale as they made a poor start in the first half where they were second best to their opponents in bright sunny skies and the Bangladeshis broke the deadlock after a series of defensive slip-ups which let in Mohamed Ibrahim who blasted into the roof of the net past goalkeeper Alvin Michel for a deserved 1-0 lead.

The Bangladeshis, coached by Portuguese Mario Lemos who only joined this team ahead of this tournament, almost added a second goal in the 18th minute from Sushanto Tripura’s cross to Suman Reza but defender Julio Brown produced a last gasp block to deny him as our local team trailed at half-time.

The second half was a different story as Seychelles team head coach Vivian Bothe rung the changes, bringing on Randolph Elizabeth and Josip Ravigna and it nearly produced dividends as Gervais Waye-Hive picked out Ravigna with a long ball but the Real Maldives striker’s low shot was saved by Bangladeshi goalkeeper Yeasin Arafat.

Just past the hour mark, Waye-Hive fed Ravigna in the penalty area as he appeared to be brought down but the ball rolled invitingly to Elizabeth who bore on goal but placed the ball wide in front of a gaping goal.

In the 63rd minute, the Seychelles team, who had taken control of proceedings, wasted another gilt-edge chance as captain Benoit Marie released Ravigna who teed up substitute Dean Mothée but he hurried his shot which flew wide with the goal at his mercy.

The Seychelles team made two more substitutions to try and retrieve this match as Brandon Labrosse and Elijah Tamboo replaced Waye-Hive and Jean-Yves Ernesta in the 65th minute and in the 86th minute, Labrosse threaded a pass to Tamboo but he heisted after rounding the Bangladeshi goalkeeper and he was crowded out.

Our team got their due reward in the 87th minute when Warren Mellie chest trapped a high ball into the path of Labrosse who rifled the ball low into the net for a 1-1 score but they were almost punished from the restart as Bangladesh stormed forward and substitute Mahbubur Hasan missed an open goal from five metres out much to the Seychelles team’s relief.

However, Seychelles also should have stolen all three points in the first minute of the three added minutes as Ravigna floated a cross onto the head of Tamboo but his glancing header flashed across the face of the Bangladeshi goal as both teams settled for a share of the points with all four teams stuck with one point after the first round of matches.

Seychelles team head coach Bothe told Sports NATION that he was pleased his players reacted after a poor start to earn a share of the spoils.

“We wanted to be cautious in the first half but the players got nervous and found it difficult to find their rhythm, but we made changes and we had enough opportunities to win this match comfortably over 90 minutes,” the Seychelles head coach said.

As for the Bangladeshi head coach Lemos, he felt his team should have built on their good start to claim all three points.

“We had a very good first half but in the second period, our opponents played with two strikers and caused us problems as we were playing too deep but overall we should have won this match,” claimed the Bangladeshi head coach.

Bangladesh face the Maldives on Saturday at 2.30pm Seychelles time while Seychelles will clash with hosts Sri Lanka at 7.30pm on the same day.

In the tournament’s opening match on Tuesday, hosts Sri Lanka came from 4-0 down to share an eight-goal thriller as Ahamed Waseem Razeek scored all their four goals 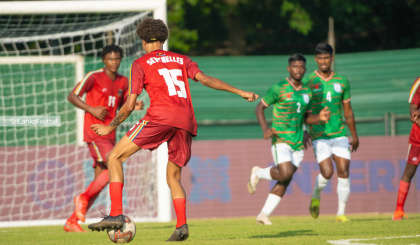 Sam Hallock (no.1 5) made his debut for Seychelles against Bangladesh yesterday