Students from the International School Seychelles (ISS) are currently taking part in the Duke of Edinburgh’s Award programme.

The requirements of the DofE programme include Adventurous Journeys, Skills, Physical Recreation and Volunteering/Service.

At the end of October, Year 11 Bronze medal students embarked on a two-day Adventurous Journey. The activities of the weekend started on Saturday October 23, 2021 when the participants met at the school at 8am and set out on the Foret Noire road all the way up to Sans Souci main road.

This first part of the expedition tested the determination and physical effort and perseverance of the participants as the route was an all ascending terrain.

Then, from the Sans Souci main road it was all downhill as participants walked down the Bel Air road to Mont Fleuri road and back to school.

Roughly, the hike took the participants about two and a half hours, at a normal pace with short rests at check points.

The key elements of the Adventurous Journey section are based on the fact that participants should benefit from working as part of a team, understanding group dynamics, the participant’s own role and the role of others in a team.

On this occasion, participants were put in small groups of three or four members and in those groups they prepared and cooked their own lunch.

Individual group members had to perform various chores as they cooked food. It was an eye opener for some participants who, for the first time, learnt how to set up fire on a BBQ grill using firewood and cooking meat on the grill, fire safety and so on.

At the end of it all, and as one of the Adventurous Journey benefits, all the participants enjoyed every part of this cooking experience as part of an important camp craft skill.

Due to Covid-19 restrictions, there was no overnight camping this time around.

The second and final day of the two-day expedition started with participants arriving at the school at 8am. They set out on the school bus to the start of the Salazie trail up along the Sans Souci main road. Everyone was in good spirits and none complained about niggles or aching muscles, given the challenges of the expedition they had undertaken the previous day. The trail was friendly at

first as it was all downhill at the beginning before the uphill ascend greeted them. Slowly but surely, the group went up along the narrow and winding trail and they were all entertained by the singing birds as they marvelled at nature and the amazing terrains.

When they got to the La Misère main road, the school bus was waiting for them and they took a ride back to school.

In their small groups, participants will now have to prepare a report or essay of their experiences during the two-day expedition which will be submitted to the DofE National office for them to graduate with their Bronze medal.

The school wishes to thank Gatsemane Katsande, the DofE Coordinator at ISS, as well as the DofE national director Gerard Pierre for his guidance and the support that his office accords ISS as an Award Unit. Thank you also to DofE assessors Sylvia, Michel and Renick who worked with the ISS group during the two days.

The accompanying photos show some highlights of the participants’ Adventurous Journey. 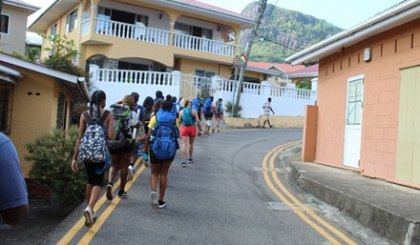 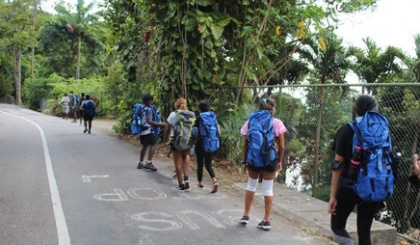 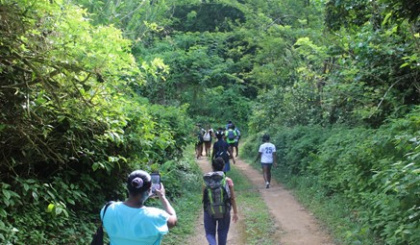