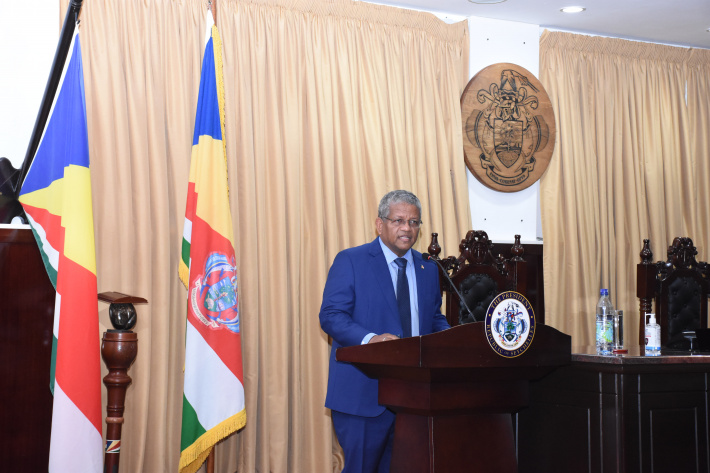 To mark his one-year anniversary in office, President Wavel Ramkalawan retraced the highlights of his government and advised drug traffickers and National Assembly members who have connection to drugs-related activities to stop immediately.

President Ramkalawan was delivering a statement before the National Assembly, in a live televised address yesterday evening.

The president in starting spoke of his inauguration on October 26, 2020 following the elections, recalling his victory speech where he led the nation in prayer, doing the same yesterday.

Reflecting on his one year in power, he remarked that his administration assumed power during one of the most difficult times in the island-nation’s history, going on to note the accomplishments and successes of his government within the short timeframe.

“Seychelles is on the right direction to attain greater accomplishments. We are on the right route to do much more for our children, and to bring our nation and the upcoming generations of the future down the route of prosperity, the route of liberty, and the route of democracy.

“We came to power in the most difficult moment, and this is recognised not only by Seychellois residing here, but also by the international community. So we assumed power when the country’s economic situation was really in a bad state, but at the same time, this was coupled with great expectations from our people. But I want to note that our number one priority as a government was to firstly stabilise our economy in the face of the Covid-19 pandemic. And of course, I salute all the members of the National Assembly of the Linyon Demokratik Seselwa (LDS) team, as we worked as a team,” President Ramkalawan noted.

The president seized the opportunity to convey heartfelt gratitude to all employees within the health sector who have and are still working tirelessly through the pandemic to keep the nation protected, as well as individuals and organisations who have contributed towards specially established funds and the national immunisation campaign.

President Ramkalawan went on to thank Abu Dhabi, India, China, Russia and the United States of America who donated vaccines towards the campaign, at no cost to the government (except for transportation costs for the Pfizer vaccines). Private laboratories were also commended by the President for having supported the health ministry in enforcing testing capacity with the reopening of borders and influx of visitors.

“Through the engagement of the Ministry of Health, Seychelles has been receiving accolades from international organisations, different states, and recently it was the European Union on their last consultation in Seychelles who congratulated us on the programme. Today, as we speak, we have managed to reduce active cases to 222, with 82 percent of our population who have received the first dose of vaccines, and 77 percent who are fully vaccinated. On average we are recording 21 cases, which means that Seychelles remains the African state that is the most successful in terms of vaccination, and you will remember that at one point Seychelles was leading the world,” President Ramkalawan asserted, highlighting government’s efforts to send patients overseas for treatment even in the face of the pandemic.

Work to continuously improve the health system is presently underway, he added.

The president reassured the nation that as long as his administration remains in power the individual rights of every citizen will be respected, with immediate legal action when there are violations.

Addressing local media, the president said they are to be afforded respect, and protection in expressing themselves freely, making reference to the Penal Code Amendment Act (2021) to which he assented last week,  and which removes criminal defamation from the Penal Code.

“Our economy is able to breathe again. The administration had a concrete plan, and we took decisions. And with the vaccination programme which was not by hazard, we managed to reopen our country on March 25, 2021. With the reopening, we suddenly had a lot of flights returning to Seychelles, and visitors were entering. Through this and good planning economically, the Seychelles rupee, which was once unconvertible, is considered the currency with the best rate of recovery in the world,” said President Ramkalawan.

“As I address you today, our reserves are higher than ever in the modern day Seychelles, since the 2008 macroeconomic reforms. Today, our net reserves have gone from US $430 million in January 2020, to over US $452 million as I am addressing you right now. Brothers and sisters, this is a massive achievement. The Minister for Finance has informed me about our gross reserves for 2021 noting that we will end the year with around US $650 million, and that in 2022 this will increase to around US $743 million,” President Ramkalawan said of the state of the economy.

The president went on to note a reduction in budgetary deficit in the 2022 budget, to be presented by Minister for Finance Naadir Hassan before the assembly on November 12.

In relation to the removal of Seychelles from the European Union blacklist for tax purposes, this is due to government’s engagements to implement appropriate laws. Government hopes to benefit from increased dividends from the Financial Services Authority (FSA).

On the subject of restructuring, President Ramkalawan highlighted the achievements of the Ministry of Foreign Affairs and Tourism, and the Ministry of Employment and Social Affairs.

He urged business owners to be patient and mindful that the employment ministry is prioritising employment opportunities for Seychellois applicants, but that the department is still flexible in issuing gainful occupation permits (GOPs) when necessary.

Over the course of January to September 2021, over 4,500 vacancies were advertised, and 1,282 have successfully been placed in employment, as compared to 668 over the same period last year.

Despite major reforms within the welfare system, government has done the necessary to provide a safety net to citizens in need, the President stated. According to figures he provided yesterday, the Agency for Social Protection (ASP) has returned to government R1.7 million in the form of money that remained unspent on STC shopping cards meant for vulnerable persons.

President Ramkalawan further encouraged the move from welfare to employment, encouraging all Seychellois to move forward, to seek employment in their self-interest, that of their families and society in general.

Despite a not so great start to the year, the total number of forecasted visitors for this year is 175,000.

He acknowledged that reforms to integrate the Seychelles Tourism Board (STB) in the tourism department did not only save government money, but also rendered the board more effective as it is now tapping into new markets. The president also issued a strong plea to citizens to not kill the tourism industry, and to protect the industry on which the economy depends.

Concerning agriculture and fisheries, President Ramkalawan spoke of the establishment of new infrastructure at district level, to encourage participation in the sectors, towards food security, and sustainable and responsible fisheries.

Among the achievements of government thus far in those sectors are the successful negotiations with the European Union (EU) to pay off dues to Seychellois seafarers and improved access to finance for local farmers, resulting in “an extraordinary movement,” in the sector, the president stated.

Local production is expected to increase over the coming years, with 17 livestock farms in Val d’Andorre ready to increase production. Just over the past year, there has been a 23 percent increase in the quantity of pork, and 20 percent in the volume of poultry produced locally. Improving national production remains on top of government’s agenda, a step in the right direction for food security.

The abattoir on Praslin is expected to be completed in the coming weeks, while another abattoir is planned for Providence, on Mahé. Farmers are being encouraged to also venture into the market.

“Local industries are being afforded all the attention they deserve,” President Ramkalawan said, in explaining government’s intentions to once again valorise once-lucrative industries, for economic return.

As such, his government is working on re-launching the vanilla industry, coconut oil and virgin oils, patchouli and turmeric, all of which are well sought after in export markets.

With regard to the Industrial Estates Authority (IEA) he noted a collection of  R16.1 million this year, as compared to R12 million in 2019. In total 16 industrial land owners are to return the plots for reallocation through processes at the Attorney General’s office.

In going forward, the administration is focused on facilitating business, improving the ease of doing business and most importantly, to attract more foreign direct investment (FDI) into the country and economy.

The president noted that among government’s major concerns are the provision of housing and land to the nation. He noted that many policies guiding the sale and allocation of land and housing need to be modernised so as to address delays and inconsistencies within the process.

For better management of government projects, a body is to be established to oversee construction, advise and follow projects to eliminate delays and wastage.

As such, the Infrastructure Agency Bill is to be tabled before the National Assembly in coming weeks, in addition to the Physical Planning Bill, a modernised law to direct all matters pertaining to planning.

The president congratulated the newly appointed leaders of the Seychelles Police Force (SPF), who he said are doing a great job.

A Bill to change the name of the defence forces, from the Seychelles People’s Defence Forces (SPDF) to Defence Forces of Seychelles, as well as changes to some of the symbols within the force is to be voted upon by the assembly in coming weeks.

The president said he is especially thankful for the professionalism of the forces during the transition in power and towards ensuring that order and peace reign in Seychelles.

Fight against drugs in our community

President Ramkalawan also commended the forces for their successes in the fight against drug-trafficking and related activities. Addressing traffickers he advised those who persist with drug-related activities to stop immediately, as they are fighting a losing battle, and that they will one by one be caught, until drugs are eradicated in Seychelles.

The president issued that same statement to members of the assembly, who he proposed have connection to drugs related activities.

Support for girls and elderly citizens

As of January 2022, government is to offer all girls in schools sanitary products at no cost, in collaboration with Vijay Patel, while from another project, all residents at old people’s homes on Mahé, Praslin and La Digue will receive diapers for free.

The president concluded his address by announcing the new names of roads as proposed by a committee established earlier this year to review the names.

The complete list is to be publicised during the week.

The new names are as follows:

Road from the Bicentenary monument up to inter island ferry, is to be named Grandcourt Road

From Fifth June Avenue from Le Chantier to Constitution Avenue

From Revolution Avenue back to original name, Royal Street 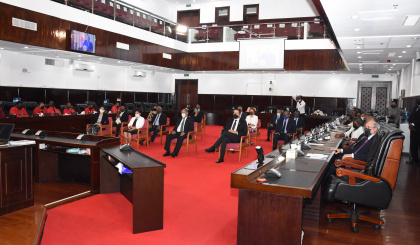 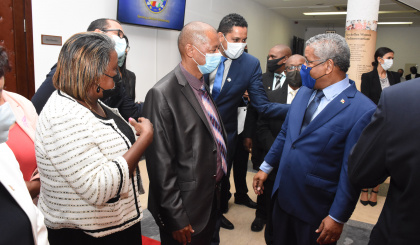 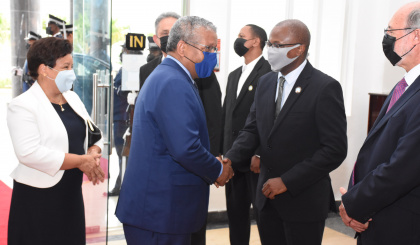