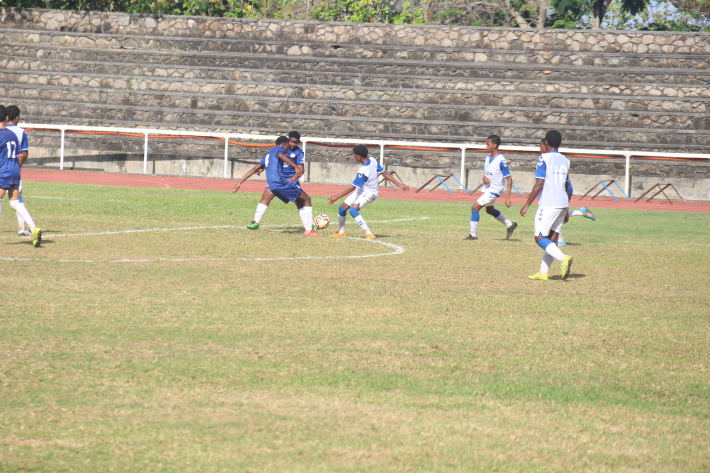 Action from a previous match played at Stad Popiler

Both teams have won their two matches played and have amassed maximum points ‒ 6 ‒ but they are separated by goal difference.

In their first match, Persévérance (Arsenal) trounced Independent School (Manchester United) 10-1 and they followed that with another high-scoring victory in the rescheduled match against Mont Fleuri (Tottenham Hotspur) whom they beat 6-1.

As for Plaisance (Liverpool), they defeated Belonie (Manchester City) 5-2 before earning a 4-2 victory against Beau Vallon (Chelsea).

Anse Boileau (West Ham) are breathing down the neck of the early leaders with 4 points after collecting a win and a loss. They edged Anse Royale (Leicester City) 2-1 in their first outing before earning a 2-2 draw on the road at Pointe Larue (Everton) who missed a penalty but scored a last -minute free-kick from long range.

In seventh position are Pointe Larue (Everton) with 2 points after two draws, while Beau Vallon (Chelsea) have just one point.

As for Belonie (Manchester City) and International School (Manchester United), they are yet to collect a point.

Starting this week, both teams’ coaches should look for defensive keys to shore up their goal-leaking teams and help them win games.

An initiative of the British high commission (BHC), and a collaboration between the two governments ‒ United Kingdom (UK) and Seychelles ‒ the inter-school football tournament features 10 secondary schools dressed up in uniforms of English Premier League sides and bearing their names.

Featuring players aged 15 years and under, the tournament is aimed at promoting health and activity, precisely to improve the physical and mental health of our young people.

Action from a previous match played at Stad Popiler

The league standings after two rounds of matches