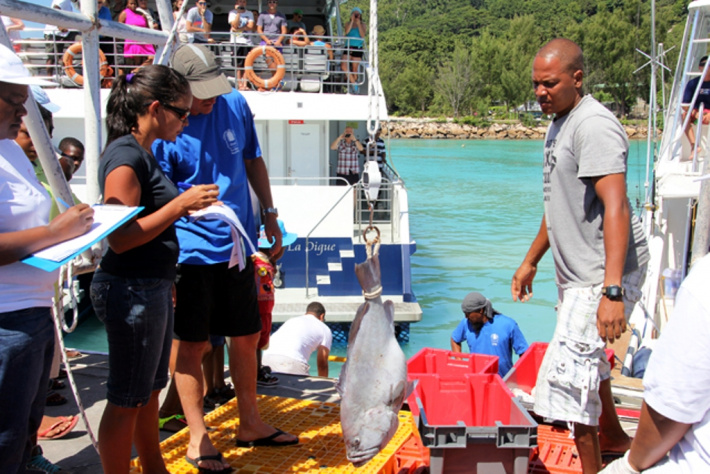 Departure is from Marine Charter, Providence, Eden Island Marina (on Mahé), Praslin and La Digue at 10am on Friday October 29, 2021 and return to the Seychelles Yacht Club on Mahé by 3pm on Saturday October 30.

Only the two heaviest fish of each category will be weighed.

Early registration and skippers meeting will be held on Tuesday October 26, 2021 at the Seychelles Yacht Club. All teams’ captains shall attend the meeting. Other team members are welcome also. Boats from Praslin or La Digue that enter but cannot attend the skippers’ meeting must contact Farima Barbier for rules review. All boats must be inspected before departure including boats from Praslin and La Digue.

Tournament dinner with awards will be held on Saturday November 6, 2021 at the Seychelles Yacht Club from 5pm to 9pm.

Registration fee is R2,000 per boat. No refund will be issued once a team have registered. However, a team may switch to another boat prior to the registration deadline. A refund will be presented to teams from La Digue and Praslin if they come for the weigh-in at Seychelles Yacht Club.

The competition is open to both trolling and bottom fishing. No more than five hooks per line for bottom fishing. Rod and reels or hand lines using live or dead bait or artificial lures/jigs. Note that electric reels, winches, drop-lines, nets and traps are not allowed. Popping and jigging are allowed.

Tassles are not allowed. A boat will be disqualified if a tassle is found on any boat. All participants must fish within the designated grid.

All billfish must be properly released in order to score points for the registered angler and his or her team. All of these requirements must be captured on video. Uninterrupted video footage should show:

• The last few minutes of the fight including the angler and proof of the billfish species. The video should also show the release.

• IGFA release rules stipulate a fish is released when a team member grabs the leader, the swivel touches the rod tip, or the connection (knot, splice, etc.) between the leader and the mainline/double line passes through the rod tip and the billfish being released either by cutting the leader or removing the hook(s).

• Failure to follow IGFA rules will result in disqualification of the fish and the fish will not be eligible for points.

A team must consist of a minimum of two anglers.

Sharks and rays are not acceptable. All boats shall select their two heaviest fish of each species on the fish species list to be weighed. The SSFC will not be collecting fish to sell.

‒ A boat will be disqualified if it arrives outside the area below after the deadline of GPS Time 3pm on Saturday October 30, 2021.

‒ A boat will be disqualified if during the tournament, it receives fuel from another vessel or refuels from a source other than regular fuel depots on Mahé;

‒ A boat will be disqualified if a non-registered person other than pre-approved members of the media joins the boat or is discovered on the boat during the tournament;

‒ A boat will be disqualified if a team member disembarks from the boat during the tournament and then rejoins the boat from a different location;

‒ A boat will be disqualified if it does not return to the weigh station under its own power.

‒ A boat that is disqualified will not be eligible for prizes.

‒ If a tassle is found on a boat, it will be immediately disqualified. If the weigh master determines that tassles have been used, the boat will be disqualified from the tournament and banned from future SSFC tournaments.

‒ A boat will be disqualified if the fishing team fishes outside of the designated fishing grid.

Emergency on the open seas

In the event of an emergency, engine failure or where a vessel has requested assistance to be towed back to Mahé, all boats in the vicinity are encouraged to respond immediately. Note that any boat providing such assistance to a distressed vessel will not be penalised for arriving past the competition deadline, and the boat will be eligible for weigh-in and prizes.

Weigh-in shall commence at 12 noon on Saturday October 30, 2021 on a first-come first-serve basis. Teams will be allowed to weigh their two heaviest fish only in each of the eligible categories. Only the team whose catch is being currently weighed will be allowed to the designated weighing area. The team captain will sign the prescribed form after the weighing is completed signifying his agreement thereto. A copy of the weigh-in results will be given to each team captain. Captains are responsible for verifying all written results before exiting the weigh-in tent. No results will be issued during the weigh-in process. No billfish will be weighed at the weigh station unless it will qualify for a Seychelles record or world record.

All protests must be lodged in writing to the weigh masters within one hour of the last boat weighing-in on Saturday October 30, 2021.

A deposit of R2,500 must accompany the protest. If the protest is determined as valid, the R2,500 will be refunded.

The weigh masters will consult with the tournament officials and their decision will be final and only announced at the prize-giving ceremony.

There are 27 prize categories in total in the tournament.

Best Average Catch is calculated by total weight of the two heaviest fish weighed in categories 1-4, 6, 8-9 trolling and categories 1-12 bottom divided by the total number of people onboard the boat.

• Best total trolling catch – Awarded to the team with the best total weight for the two heaviest fish for each species weighed in the trolling fish categories 1-4, 6, 8-9;

• Best Total Bottom Catch – Awarded to the team with the best total weight for the 2 heaviest fish for each species weighed in the Bottom Fish Categories 1-12;

• Best total overall catch – Awarded to the team with the best overall total weight for the two heaviest fish for each species weighed in the combined trolling and bottom fish categories 1-4, 6, 8-9 trolling and categories 1-12 bottom.

The tournament winners (best team) and runners-up will be determined on a point-based system to be calculated as follows:

• Points will be awarded as per the chart for heaviest and second-heaviest fish in each category.

• A team will be awarded points for both first and second places if they have caught the two heaviest fish in that category. Exception to this rule is category 5 Marlin and category 7 Sailfish. As an example, should a team releases two sailfish and no other team releases a sailfish, the team will only be awarded 5 points for first place and there will not be a winner for second place. Same applies to category 5. Should there be a tie for categories 5 and 7, the winners will be decided based on the earliest GPS time of the tying fish.

• Should there be a tie in weight/points of a second place finish, each team shall be awarded an equal number of points (3 points for categories 1-4, 6, 8-9 trolling and categories 1-12 bottom).

• If two or more teams are tied with the same number of points at the end of the tournament, the team with the most first place finishes in the 1-9 trolling and categories 1-12 bottom fish categories will win the tie-breaker. If there is a further tie due to the same number of first place finishes, then the team with the best total overall catch shall win the tie-breaker. Then it’s a coin-toss!