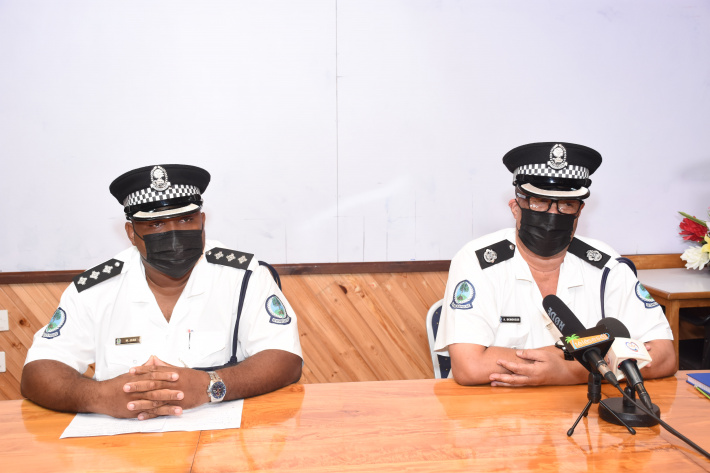 It has been confirmed that ten people, including three juveniles are presently in police custody following an incident on Tuesday night at Perseverance where disturbance, injuries and damages to property were recorded.

Meanwhile a 19-year-old man who was also among those arrested, has been released on bail and he is to report at the CID office this morning.

In a press conference yesterday led by Superintendent (SP) Antoine Desnousse and Assistant Superintendent (ASP) Marcus Jean, the police force explained that officers from various units were deployed to the scene to tackle a situation, precisely confrontation involving two families.

According to ASP Jean, the conflict started on Sunday ending into the arrest of a member of one of the two families.

He explained that after being released, the suspect repeated the offence, this time involving several members of both families.

ASP Jean explained that during the incident, properties were damaged, while several people were taken to hospital for treatment of minor injuries.

He added that even if the incident hit the ceiling on Tuesday night, there was no sign that it was a planned thing, while investigation is still ongoing.

After being informed on the situation, officers were deployed to the scene where the agitators switched their attention to the police where officers were assaulted.

Still according to ASP Jean, various objects and weapons such as rocks, machetes and even Molotov Cocktails were being used against each other, before attention was switched to the police officers who had to make several arrests.

He explained that it is the priority of the police to ensure that those responsible for the disturbance are dealt with.

SP Desnousse noted that following the incident, the police had stepped patrol in the Perseverance area and has reassured the residents that the place is safe, while such incidents will be dealt with accordingly if they happen again.

He also urged all those who are planning on instigating such actions to think twice before doing so, since appropriate actions will be taken against them.

Regarding allegations of drugs involvement, SP Desnousse explained that investigation is ongoing and that if ever the allegation is true, the Anti-Narcotics Bureau (ANB) will step in and take it from there.

He also encouraged members of the public to see the police as their friends, rather than enemies.