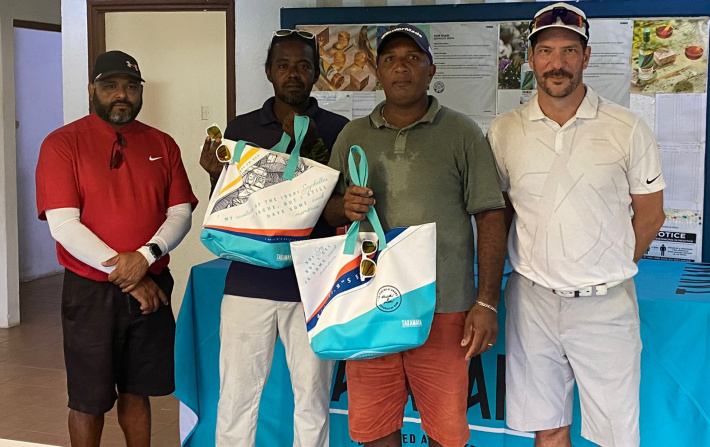 Hudson Figaro and Barry Clothilde are the winners of the Takamaka Pairs Matchplay following their win over the pair of Edwin Palmer and Margaret Pragassen.

The final match was played on Saturday afternoon at the Seychelles Golf Club, Anse Aux Pins.

At the half-way mark, Hudson Figaro and Barry Clothide had a slender lead of one up after Hudson holed a long putt on the 9th green! From there, there was no looking back for the pair who finished the match four up with three holes to play, taking a well-deserved win.

A total of 24 pairs started the competition in June with the top two teams from each of the four league pools going through to the knockout stages.

Richard D’Offay of Trois Frères Distillery was on hand to present the prizes on behalf of Takamaka.

Mr D’Offay has committed to continuing the company’s support of the annual competition and the Seychelles Golf Club as a sponsor for the foreseeable future.

The subsidiary pairs competition, also sponsored by Takamaka, saw the Andrade brothers ‒ Axel and Adrian ‒ narrowly clinch victory on countback ahead of Jerry Jean-Baptiste and Jake Searles, both with a score of 44 points.

In third place were the pair of Daryl Anthony and Alix Esparon with 43 points.