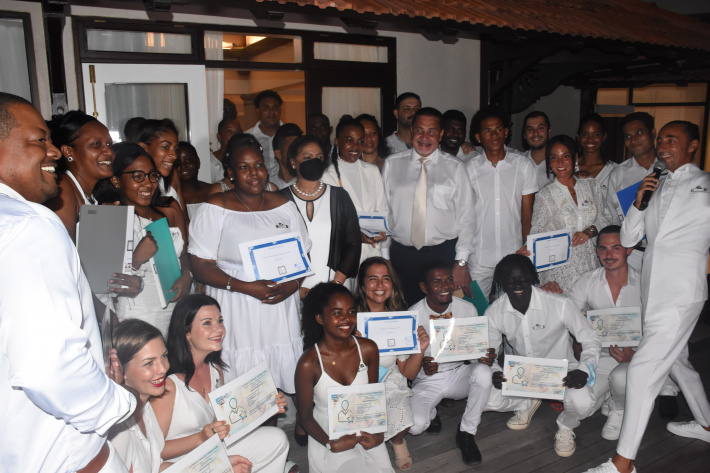 The certificate recipients in a jubilant mood as their pose for a souvenir photograph with guests (Photo: Thomas Meriton)

Six months after it started its operations Club Med Seychelles, based on Sainte Anne, has successfully undertaken a series of training for both its local and expatriate workers.

Most notably, the resort has hand-picked five of its Seychellois employees who will receive the opportunities for further skills development at different Club-Med locations across the globe for several months.

It was during a ceremony held at the resort on Friday evening that the resort’s staff received their certificates.

The ceremony was further attended by the Minister for Foreign Affairs & Tourism Sylvestre Radegonde and Minister for Employment & Social Affairs Patricia Francourt, both of whom commended Club Med for keeping its promise to not only recruit locally as much as possible but also to train Seychellois.

“We had an agreement with Club Med to ‘recruit, recruit and recruit’ and we worked closely together. We have followed along in this journey with you and what I like the most is that what you have promised, you are delivering tonight and that was to ensure that our Seychellois get very good opportunities to be trained locally and abroad,” stated Minister Francourt.

CEO of Club Med Exclusive Collection, Patrick Calvet, noted that Club Med Seychelles is proud to have committed to its promise made to the government and to the country to promote and train Seychellois talents, and provide them with the opportunities to travel.

He added that “it is in our Club’s DNA and culture to ensure that we accompany our staff as they grow, develop and take further responsibilities. This night highlights the promise we had made to the Ministry of Tourism, Ministry of Employment and other partners to promote persons working with us and make them travel”.

“I am very proud to see how far Club Med Seychelles has come from being a concept on paper some three years ago. After all the challenges that come with opening a new village and destination, integrating and discovery a new culture, it shows that the staff has undertaken a fantastic work,” stated Mr Calvet.

He added that Club Med Seychelles has quickly become one of the most sought after destinations, among its numerous collections of all-inclusive hotels.

The five Seychellois who have been selected for further skills development abroad will be placed in any of the over 70 Club Med destinations in the world, from ski resorts in the Alps to Bali to the Caribbean and even closer to home in Mauritius or Maldives.

One of the five Seychellois who will be placed abroad is Praslinois Jacques Charles who has been a pastry chef for over 15 years.

“I had not expected to gain such an opportunity at all. I came to work at Club Med expecting to deliver my work as usual and the management has appreciated my efforts. I feel very proud and honoured. I will be travelling and learning the cuisine of different countries, how they work and then come apply this back to Club Med Seychelles,” stated Mr Charles.

Marie-Fi Cherry, another Seychellois set to embark on the Club Med international programme, stated that she is also looking forward to learn as much as possible.