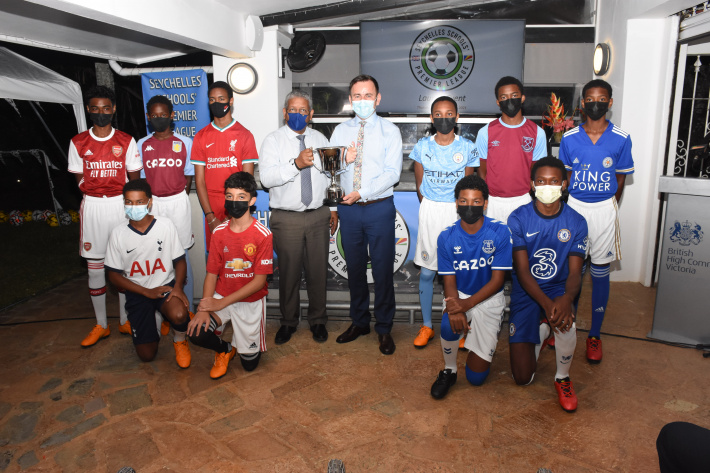 Competition kicks off next week

The Premier League-inspired schools league was launched on Thursday night by British High Commissioner Patrick Lynch at his residence at Bel Air and the event was graced by President Wavel Ramkalawan, who is also the patron of the Seychelles Football Federation.

There are currently 14 exciting community initiatives that are ongoing with the British high commission and among them are: A significant programme of police reform; world-leading expertise and support on anti-corruption; supporting and learning from local expertise at the forefront of nature-based solutions to the climate crisis; and launching a range of community-based projects.

“And the one we are most proud of is the Seychelles schools Premier League; again, a great example where we are partnering with local leaders in the sector, local expertise and local innovation. And from my meetings over the last few months, I am proud that we are not just working with coaches. We are working with educators. We are working with individuals who understand the young people they are working with, and who are dedicated to improving their life chances,” shared High Commissioner Lynch.

He explained that the project is at the heart of what everyone involved is trying to do with this project. We have drawn on that experience and are developing a project that has great ambitions:

The project is a collaboration between the two governments ‒ United Kingdom (UK) and Seychelles ‒ and Glenny Stravens made a presentation for those present. Referees, team coaches were also presented with their resources.

Putting the project within the context of the UK/Seychelles relationship, High Commissioner Lynch stated that “our shared history, our shared values, both reflected in our shared love of football. You will no doubt be very aware that all ambassadors and high commissioners have an agenda. The good news for the British High Commission in Seychelles is that this agenda is transparent and positive. It lives out the UK government’s vision of our international outreach, serving as a force for good. The UK has no selfish or strategic interest in the Seychelles. There are no issues of finance or sovereignty at play. It is about shared history, shared values, and, tonight, our shared love of football.”

The shared history is all around us: Forged over 200 years; Evidenced in the legal code and the language of education and government; The continued movement of people between our two great countries, and in everyday things like the police uniforms, driving on the left, the Victoria clock tower and the fact that it is perfectly acceptable to put milk in your tea noted humorously the high commissioner.

The British high commissioner also talked about tour shared history which has also given us shared values. “Importantly, this shared history has also given us shared values. Those core issues of community and democracy. The shared understanding that governments, presidents, principal secretaries and high commissioners serve at the will of the people and are there to serve the needs of the people. In a number of areas, we are doing that by drawing in UK - and international - experience, to work with local experts in support of the clear vision presented by the new government.”

This initiative for Seychellois school children has seen each school being allocated a Premier League team through a draw. This was followed by the draw for the competition. All schools received their kits and the kick-off of the league was done by High Commissioner Lynch.

Glenny Stravens, estates manager at the BHC, noted that the league will start next week as a pilot project and it will last for nine weeks.

“The SFF will be organising for transportation supported by the BHC and we will follow the games of the actual Premier League and all matches played on Saturday, the same two teams will play the match on Friday. In December there will be a football festival and in the spirit of being inclusive the schools on Praslin and La Digue will also be included in the league later this year. As from April next year, the BHC will also start a league for girls,” said Mr Stravens. 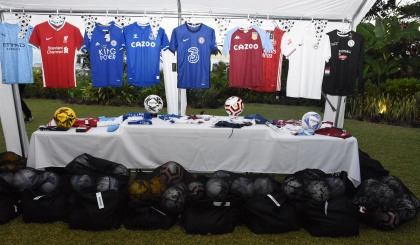