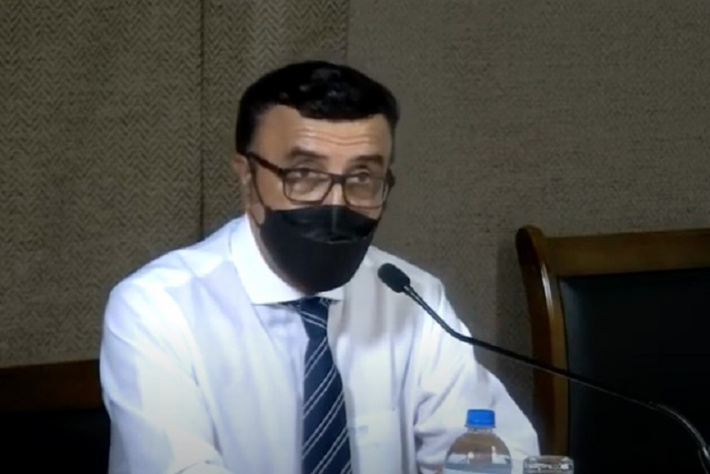 Former politician Daniel Belle was the only person before the Truth, Reconciliation and National Unity Commission (TRNUC) in open session and as a general witness, late yesterday afternoon.

He was called to give contextual evidence on the return from exile of former President James Mancham and on his first meeting he had with President Albert Rene which people thought changed his (Mancham) approach towards the ruling party.

It was said that Mr Mancham was all smiles going into the meeting with Mr Rene but when he came out, he looked disconcerted and flushed.

Mr Mancham returned from exile on April 1992, a year after President Rene announced the return of multiparty politics in the country.

The commission had also wanted to know Mr Belle’s involvement on the constitutional commission.

Speaking on the meeting between Mr Mancham and Mr Rene, Mr Belle said he had only a little notion of what happened in the meeting through him coaxing snippets of information out of the former Democratic Party leader from time to time.

Mr Belle said that from what he had gathered from Mr Mancham, in view of the army still in control of the day security in the country, President Rene had warned him that he will not be responsible for his security.

He further said that President Rene also told Mr Mancham that he knew of people in the latter’s entourage who are planning to hurt him (Mancham).

He said Mr Mancham had no intelligence service at that time and the things Mr Rene told him, good or bad, were to demoralise him.

He said in view of the situation in the country at that time, Mr Mancham had once described his return as that of a fish “entering into a net”.

He said that from what he learned, Mr Mancham did not return to Seychelles to take power but only to reconcile the two main political factions (SPPF/SDP).

He further said that Mr Mancham’s aim to reconcile the people that had been torn apart by political rivalry, was obvious through his actions.

He added that the former democratic leader was not brutal or vindictive as he was against violence.

He noted though that the former democratic leader did tell him that although he was close to Mr Rene, his phone was bugged even if he knew about it.

Asked if it was true that Mr Mancham was proposed by Mr Rene in the meeting to abandon the fight for power in return for all his assets, Mr Belle said that he had no clue about the proposal but noted that although Mr Mancham did get back some of his assets, some others, including that of his close families, were not returned to him or to his family.

He said that although Mr Rene might have been in possession of some private belongings of Mr Mancham, who was staying at State House, he could not prove if Mr Rene used any of the belongings found (if there were) to blackmail him.

He stated that upon Mr Mancham’s return to Seychelles, a lot of people came to greet him at the airport and the mindset at that time was that he was going to definitely rule the country following an election.

He said that the popularity of Mr Mancham did have an effect on the ruling party and it tried by all means available to divide the opposition to stay in power, something it succeeded to do.

Mr Belle said that Mr Mancham did not want to engage in confrontational politics with Mr Rene as he was not sure of the latter’s reactions should he lose power and also due to the fact that Mr Rene had the backing of the army.

He added that Mr Rene would never have wanted Mr Mancham to take power from him and he would have done anything to prevent it from happening.

He further added that he had heard Mr Rene on several occasions using the expression ‘over my dead body’ to illustrate his intention.

He stated that Mr Mancham did not want the population to suffer more than they had been suffering since the day of the coup d’Etat of June 5, 1977, and it was why he stayed away from confrontational politics.

He said that there was no political tolerance during the days of Mr Mancham after his return from exile and beyond as compared to now.

Mr Belle said that if Mr Mancham had won the first election after his return, he would not have survived as Mr Rene with the backing of the army would have regained power and that would have led to possible civil unrest and bloodshed.

Regarding his involvement on the Constitutional Commission, Mr Belle said that an election was held in 1993 to appoint members on the 24 membership commission and the Democratic Party (DP) won 8 seats (33%) while the Seychelles People’s Progressive Front (SPPF) won 16 seats (58%). The other parties did not win any seats.

Mr Belle said that there was a disagreement with regard to land acquisitions and the DP delegation walked out of the discussion as they were prevented from making their arguments.

He further said that the SPFF continued with the deliberations and the constitution concluded by them was later put to a referendum on November 15, 1992. He noted that the draft constitution got only 53% of ‘Yes’ votes and thus was rejected as it did not garnered the minimum 60% of votes needed for it to be accepted.

He stated there was a change in the delegates in the second drafting of the constitution with Mr Rene leading the SPPF delegates and Mr Mancham leading the DP delegates. The commission was chaired by Maxime Sauzier and later by Bernardin Renaud. He added that the second constitution, based on a presidential system, was approved on June 18, 1993 by 73.6% of voters. He said that he agreed with the outcome of the constitution as it has been able to change the way of life and mentality of the people of Seychelles.