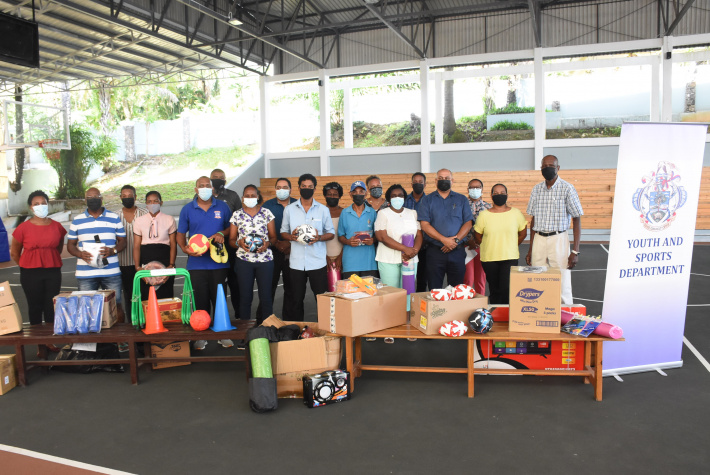 PS Jean-Louis, CEOs Larue, Belmont and Laurence in a souvenir photograph with sports volunteers who have received equipment to help in the training of Seychellois youth (Photo: Thomas Meriton)

Sports volunteers running amateur sports clubs in the communities have received equipment for their respective sports.

The different sports equipment were handed over to the sports representatives by the principal secretary for youth and sports, Ralph Jean-Louis, in a small ceremony which took place at the Victoria Gymnasium on Friday.

The equipment were purchased under the Sports Trust Fund (STF) established in 2016 for the development of youth sports teams and clubs in the community. Administered by the youth and sports department, the fund has been allocated R400,000 to provide assistance for sports-related projects, activities and schemes that will benefit the youth from primary schools up to 30 years of age.

The different sports being practiced in the schools and in the communities by the volunteers and that have benefited from the STF for 2021 include football, basketball, volleyball, handball, swimming, athletics, table tennis, aerobics, yoga, dancing and combat JuJitsu. The accessories presented were in the form of balls, hurdles, stop watches, aerobic and yoga exercise mats, court; football boots, spike shoes, skipping ropes, swimming caps, cones, whistles, bats, pumps, combat gloves and protective equipment among others.

In his address, PS Jean-Louis called on the animators to make good use of the equipment aimed at getting the youths to stay mentally fit and to practice a sport, and also to lure them away from anti-social activities.

He added that the presentation has come at an opportune time when the youth will be away from school on holidays and they will have the sports activities to help keep them busy.

“We appreciate the work you are doing to steer our youth from bad influences and to bring them into sports which have much better benefits in terms of developing their mental and physical fitness among other aspects in life. I hope that you get them to learn to take ownership of the equipment for long term benefit,” PS Jean-Louis said.

Philip Philoé, who runs a Ju Jitsu club at Roche Caïman, told Sports NATION he was planning to recruit some members to join his club and the donation has come at an opportune time.

He added that the equipment will be of great benefit to his club as he was lacking some. He received a batch of head guards, belts, groin cups, shin guards and gum shields.

“What we do helps to get youngsters off the streets and to get them to be more disciplined so that they become good citizens,” said Mr Philoé, noting that because of his love for the sport and youth, he has had to dig in his own pocket to equip the club where youngsters train for free.

Anna Barra, a physical education teacher at Cascade primary school, said she wants to form basketball, football and athletics teams at the school for the benefit of the district.

She added that most clubs have closed down and as a result some youngsters have decided to spend their time by the roadside doing nothing.

“The Cascade district used to have strong sporting teams, especially in football and basketball. And I would like to form the youths to represent their district in high level sports competitions. I want the students to develop the habit of doing sports after school hours instead of going by the roadside,” Ms Barra said.

A similar presentation was held the weekend before for sports animators on Praslin and La Digue.