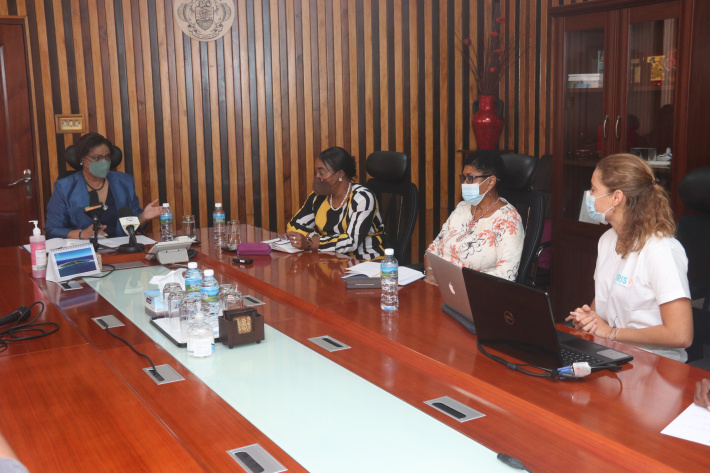 Sexual assault is best described as an act in which one intentionally sexually touches another person without that person's consent, or coerces or physically forces a person to engage in a sexual act against his or her will.

In an attempt to reduce the number of cases of abuse and ensure a safe environment for all, including for men, women and children, the government through the Ministry of Family, Youth and Sports, along with the Ministry for Employment and Social Affairs will now work alongside non-governmental organisation (NGO) End Rape in Seychelles (Eris) on coordinated educational programmes to mitigate the problem.

Chairperson of Eris, Anna Dorizzo, along with executive committee members, on Friday met with ministers Marie-Celine Zialor and Patricia Francourt along with principal secretary for social affairs Linda William Melanie to discus on the way forward in the fight against sexual abuse.

It was agreed by both parties that there is the immediate need to set up specialised support services for victims and aggressors, provide education, as well as rehabilitation to eliminate, and in some cases prevent, further forms of violence.

Through presentations, members of Eris provided a comprehensive report on the available statistical data on local sexual assault cases.

Both ministers have welcomed the various initiatives brought forward by the organisation and pledged their full support and input in the joint battle which they described as collective and need the support of everyone.

It is a recently formed NGO which has set itself the not so easy task of tackling the high incidences of sexual harassment and sexual assault in Seychelles.

Eris has made it its mission to change this, by smashing the taboo and creating a space for the difficult but necessary conversation to start.

Through education, open and honest conversation, Eris believes it can start to pave the way for a more effective system to deal with sexual assault cases in Seychelles.