The Seychelles national selection on Wednesday suffered one of its most humiliating defeats at regional level, losing 1-7 to the Coelacanthes of the Comoros in its opening match at the ongoing friendly tournament which is taking place at the Maluzini Stadium.

The tournament, which is part of the Comoros’ preparation for the Coupe d'Afrique des Nations de football (Can) 2021, is also featuring Burundi which is replacing The Gambia.

It was also the first assignment for the newly appointed coach and directeur technique national (DTN) Franco-Algerian Haroun Osama who has been in the post since June.

For their first warm-up match, the Comoros largely dominated the Seychelles’ selection with El Fardou Ben Mohamed scoring a hat-trick.

Under strong pressure from the Comorians from kick-off, the players of coach Haroun managed to put up a slight resistance, even if the comfortable Coelacanthes were in total control of the match and ball possession, with several scoring opportunities, precisely in the seventh (7th), thirteenth (13th) and twenty-fourth (24th) minutes through Ali Mmadi, Mohamed Youssouf and Faïz Selemani respectively.

The deadlock was finally broken in the 31st minute of play when a cross from Saïd Bakari found Ali Mmadi in the middle of the box who assisted Selemani for the opener.

The ball was in the back of the Seychelles’ net again three minutes later after Mohamed Youssouf scored a second goal for the Comorians from a Selemani’s shot which rebounded off the post.

In the second half, the Comorians maintained their pressure which paid off after just three minutes of play when Mogni scored his second goal of the match through a volley in the 48th minute, extending the Comorians’ lead to 4-0.

In the 56th minute, the Comorian coach Amir Abdou brought in El Fardou Ben Mohamed who scored two consecutive goals (62nd and 74th minute), stretching the Coelacanthes’ lead to 6-0, before Ryan Henriette pulled a goal back for Seychelles in the 77th minute, reducing the deficit to 1-6.

In the 82nd minute however, Ben Mohamed scored his third goal of the match and thirteenth for his country, sealing the one-sided match with a humiliating 1-7 defeat for Seychelles who will play against Burundi on Saturday.

After keeping silent over the trip, the Seychelles Football Federation (SFF) on Wednesday issued a press release, saying the tournament will provide the young players with experience that will prepare them to meet the requirements of performing at international levels.

Chief executive of the SFF, Georges Bibi, said the team selection has yet to participate in any final phase of competition of the Can, or the World Cup.

“We are going to need time to prepare the players who will, tomorrow, represent Seychelles at the highest level of any competition,” said Mr Bibi in the press release.

Still according to the press release, coach Haroun and president of the SFF, Elvis Chetty, are working together to create and implement a strategic plan aimed at developing the skills of young players regionally, but also at developing a culture of success and wins.

“These two matches, against the Comoros and Burundi, come at the right time in this process, providing us with an opportunity to prepare for the future of Seychelles football,” said Mr Chetty, who further added that the SFF currently has a project in place to re-structure and create a plan to organise the team’s objectives collectively and work on precise and calculated goals revolving around competency and available resources.

As for coach Haroun who started his local adventure on the wrong foot, he said the philosophy of the federation revolves around a culture of winning and that they want to prepare the players to reach success by developing their sense of autonomy within the greater sphere of team spirit and teamwork, as it is the players themselves who will face the challenges and eventually excel in the sport.

“Our short-term goal is to develop players of high standard by challenging them and focusing on qualifying in different international competitions,” said coach Haroun, who also noted that the national selection aims to create a team of young players, averaging 21 years of age, with 70 percent being 21 and under and the remaining 30 percent being players that have been in the previous selections.

These players, he said, will help the younger ones progress through their experience and maturity.

“The aim here is to provide visibility to the young players, so that they may stand a chance of progressing further and possibly getting signed to bigger teams in Europe,” added coach Haroun. 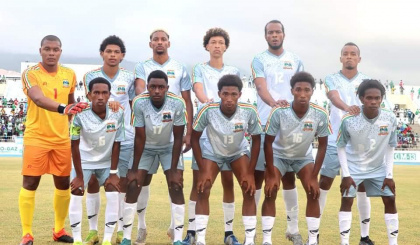