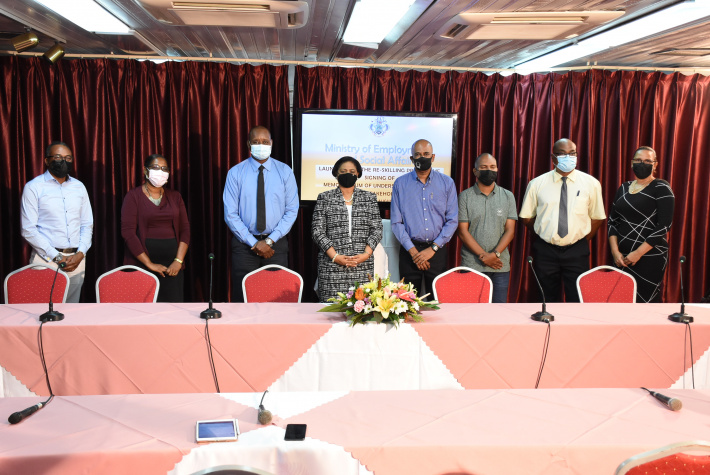 Ministry officials and stakeholders in a souvenir photograph after the signing (Photo: Jude Morel)

The Ministry of Employment and Social Affairs yesterday relaunched its Skills Development Programe which has now been extended to also assist unemployed job seekers aged from 31 to 62 years old.

Prior to the relaunch yesterday, the Skills Development Programme had only targeted unemployed youths aged 15 to 30 years.

In line with this change, the Ministry of Employment and Social Affairs yesterday also signed a series of memorandum of understandings with stakeholders to provide tailor made training programmes for the job seekers.

The programme, which was officially launched in 2016, allows job seekers to undertake skills development training or reskilling at various work organisations.

Due to unprecedented demand caused by the pandemic’s upheaval of the labour market, the programme has been reviewed and its scope broaden to cater to the entire working population, which are people aged 15 to 62 years old.

According to the ministry, widening the scope is more far-reaching in a time when the unemployment rate is increasing and it bridges the gaps on the labour market in regards to skills inadequacy.

The memorandum of understandings that were signed yesterday reflects the sectors of great demand in the country such as construction, hospitality, technology and agriculture.

It was the principal secretary for employment, Jules Baker who signed the memorandum on behalf of the ministry.

The first memorandum of understating was signed with the Seychelles Institute of Technology represented by its director Hubert Barbe.

A memorandum of understating was also signed with GEM Consultancy, represented by Marie-May Leon, which provides training for people with disability to assist them in joining the world of work.

“We have extended the age range from 15 to 30 years to up to 62 years so job seekers should not worry; there are opportunities for training and reskilling,” said PS Baker.

“We have more MoUs to sign with other interesting organisations,” he added.