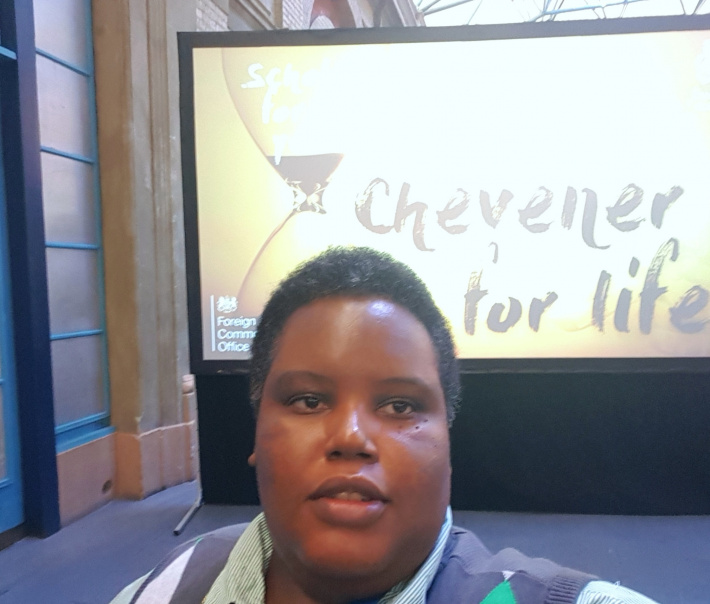 ‘Chevening has not only had a positive impact on my professional development; it has also helped me to pursue more personal goals’

Over the course of this week, we have been featuring local case studies from alumni of the UK-government-funded Chevening international awards programme, aimed at developing global leaders. This year’s Chevening Scholarship application window runs from August 3 to November 2, 2021.

Today, we feature the story of Fabianna Bonne, the general manager for human resource and development at the Seychelles Public Transport Corporation (SPTC) – and 2016 Chevening Scholarship Alumnus.

“My name is Fabianna Bonne and I am 32 years old. I went to school across Seychelles, including: Plaisance, Port Glaud, Silhouette, Grand Anse Mahé and Anse Boileau. I applied to the 2016/2017 Chevening Programme and went on to study a Masters in Theory and Practice of Human Rights at the University of Essex. I currently work at the SPTC, where I am the general manager for human resource and development.

“There are several reasons why I applied to the Chevening programme; primarily, the opportunity to study at a leading university. The University of Essex has an excellent programme in Human Rights. Most of the lecturers had been involved with the United Nations or other Human Rights bodies which made them not only academic experts, but practical specialists as well. Furthermore, the programme attracted a diverse group of students from all over the world. This gave me the opportunity to learn from my peers, which gave depth and richness to my learning and understanding of Human Rights. This was reinforced by the Chevening programme, where I connected with other scholars from all across the world through the alumni network. I also received opportunities to make friends while building my networks with professionals in other countries, which has proven useful both workwise and personally. Living in the UK for a year to follow the Chevening programme was a great additional perk as I discovered the British culture, architecture and history first-hand, and visited places like Aberdeen, Cambridge, Brighton and Oxford. It was also an excellent chance to travel to mainland Europe.

Being part of the Chevening programme built on the values that I already had, the most pertinent being resilience, as it took some adapting to the weather and British ways of doing, but I was resolved to reach my goals. Another value reinforced by my Chevening experience is respect of diversity and openness to experiences. I took the opportunity to engage with people from diverse backgrounds and cultures and develop an appreciation of differing opinions.

“Chevening has not only had a positive impact on my professional development, it has also helped me to pursue more personal goals, such as leading an NGO which has had some success both locally and internationally. I am the co-founder and former chairperson of the LGBTI Sey, which is the only local NGO advocating for rights in terms of sexual orientation and gender identity. Through my work on this platform, the LGBTI Sey has been able to influence policies and legislation both locally and internationally, through multilateral networks pushing our interests at the Southern African Development Community (SADC) and Commonwealth levels. This has also brought other opportunities – such as attending the Commonwealth Heads of Government Meeting (CHOGM) in London in 2018 – as well as being part of the One Young World Summit in Bogotà, Colombia, in 2017. In 2019, I was awarded the Points of Light Award on behalf of the LGBTI Sey. This is an award that recognises outstanding volunteers and people who are making a change in their community.

“I believe that Chevening is a distinguished programme and a fantastic opportunity and I would encourage all aspiring professionals to apply. It is an outstanding chance to pursue career development and personal growth. Candidates should be introspective when applying and be confident in their abilities, ambitions and sense of self as this makes an impression during the selection process.”

Chevening offers a unique opportunity for future leaders, influencers, and decision-makers from all over the world to develop professionally and academically, network extensively, experience UK culture and build lasting positive relationships with the UK.

To learn more and apply before the November 2, 2021 deadline, visit:

Early childhood coordinators and teachers get more training on pre-numeracy and recording of data |09.09.2021

Early childhood coordinators and teachers get more training on pre-numeracy and recording of data |09.09.2021