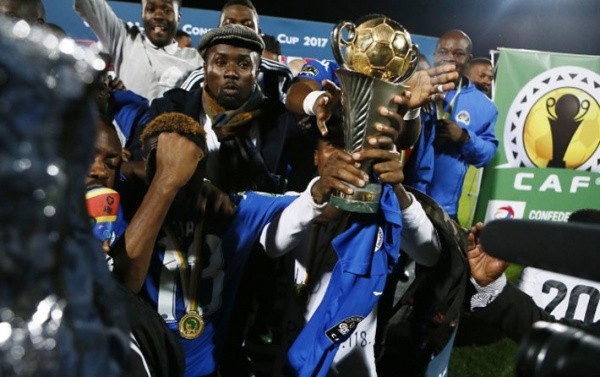 TP Mazembe players and supporters celebrate with the trophy their victory over Supersport United in the final football match of the CAF Confederation trophy at Lucas Moripe stadium in Atteridgeville on November 25, 2017 in Pretoria.

South Africa has formally bid to replace Cameroon as hosts of the 2019 Africa Cup of Nations, a senior football official told AFP Thursday.

Earlier Thursday, Egypt said it was willing to stage the biennial African football showpiece after Morocco surprisingly announced it would not bid.

Morocco had been strong a media favourite to host the tournament for the first time since 1988.

Last week, Cameroon was stripped of the right to stage the tournament with African football body CAF citing behind-schedule preparations and security concerns.

The deadline for bids is 2200GMT Friday with a decision on who replaces Cameroon to be made in Senegal on January 9.

South Africa last week "expressed an interest" in staging the Cup of Nations for the second time in six years, but stopped short of formally applying to be hosts.

If South Africa is chosen, it will be third time it has replaced another country as hosts of a tournament first staged in Sudan 61 years ago.

It took over from Kenya in 1996, going on to win the tournament just four years after returning to international football from apartheid-induced isolation.

The 2019 Cup of Nations will be the first to feature 24 teams, up from 16 in Gabon last year when Cameroon were surprise winners.

There will also be a change of dates with the tournament moving from January/February to June/July to avoid club-versus-country clashes.

Cameroon won in 2017 despite a number of stars, including Liverpool defender Joel Matip, opting to stay with their clubs in the middle of the season.