Dennis Hardy is now the new vice-chancellor of the University of Seychelles (UniSey), replacing Marina Confait who is pursuing further studies 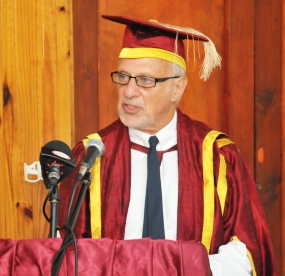 Professor Hardy was conferred by UniSey’s pro-chancellor Professor Rolph Payet yesterday during a ceremony at the university’s Anse Royale campus.

Attending the ceremony were UniSey’s council members, its registrar Michel Denousse, lecturers and other members of staff.

Professor Hardy graduated with a first degree in geography from the University of Exeter United Kingdom, where he went on to complete his Masters in the same subject.

He then joined the Greater London Council and qualified at University College London as a professional urban planner.

After an initial period in planning practice, he moved into academia starting as a lecturer in urban planning.

Following a varied programme of teaching and research he became increasingly involved in university management – with senior positions as head of department, dean, pro vice-chancellor and deputy vice-chancellor at Middlesex University London. He then went on to head that same university’s campus in Dubai.

Professor Hardy was formerly the president of the International Communal Studies Association and is currently a fellow of the Royal Society of Arts.

He was entrusted with the mace by Professor Payet as part of the investiture before taking the oath of office.

“I am confident that you will be able to inspire and lead UniSey to new heights of sustained success and achievements,” he added.

In his acceptance speech, Professor Hardy acknowledged the contribution of his two predecessors who have laid a strong foundation for future growth.

“I will do everything possible to ensure that the university continues to make great progress,” he said. 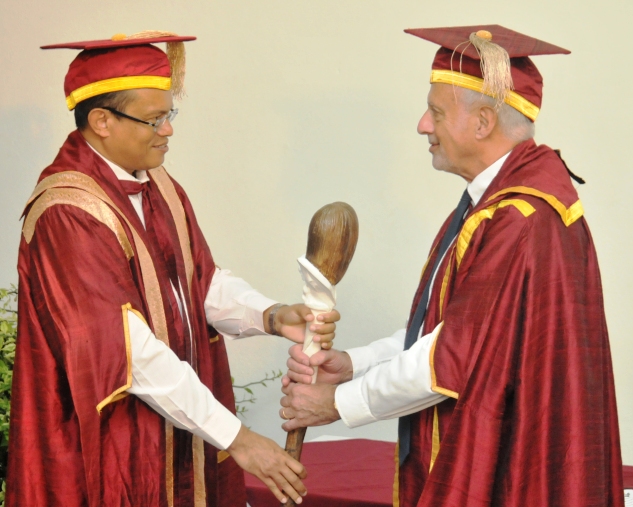